We have been waiting a few years for a new Thor movie. Thor: Ragnarok – Trailer Number 1 has dropped and damn… Take My Money! Watch it then read on. 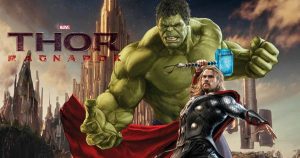 Just to clear it up for all the geeks that are not as up on their Asgardian lingo, let’s talk about Ragnarok.  According to Wikipedia:

Ragnarök is a series of future events, including a great battle, foretold to ultimately result in the death of a number of major figures (including the gods Odin, Thor, Týr, Freyr, Heimdallr, and Loki), the occurrence of various natural disasters, and the subsequent submersion of the world in water.

After Ragnarok, the world returns and the world is repopulated by two human survivors. Almost and end of the world beginning of the world – Revelation – Noah’s Flood – Garden of Eden mashup is the Judeo-Christian reference helps out.

The Players – not a full listing but consider it a tasting.
Returning Alumni:

Needless to say, I cannot wait for November 3, 2017. Thor has been a favorite character of mine in the comics for a long time, Chris Hemsworth was born to play this role. Damn fine movies. Bring it on.