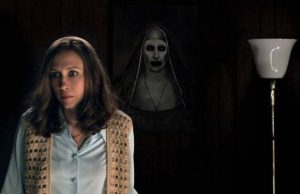 This movie is based on a true story about the life and careers of Ed and Lorraine Warren, a pair of paranormal investigators and demonologists. It is directed by James Wan and written by Chad Hayes and Corey Hayes. The film itself was 20 years in the making. Ed Warren took the original tapes to a producer who agreed to make it into a movie and it was picked up and dropped several times before finally being picked up by New Line Cinema.  The Conjuring was released on July 19th 2013.

The movie cast starred Vera Farmiga and Patrick Wilson who played Ed and Lorraine Warren and they actually went to Connecticut to spend time with the Warrens to learn more about the roles they were to portray. Also in the film is Ron Livingston and Lili Taylor who play the parents of the afflicted family. Lorraine Warren herself has a short cameo in the film as well.

The movie starts with the Perron family moving into an old farmhouse in Harrisville, Rhode Island in 1971. Paranormal events start happening almost immediately and continue to plague the family almost daily. Once the attacks become more violent in nature Carolyn Perron (mother) decides to call in the Warrens for help. They find the house itself is home to a creature named Bathsheba who was an accused witch who murdered her child and later committed suicide on the property. All hell starts to ensue from this point forward and continue to the end of the film.

This is my favorite type of horror movie. No blood, guts and slashers just an awesome psychological thriller that pulls the audience in from the beginning and doesn’t let go to the very end. The film is very well made and the plot is terrifying. It makes you feel like you are there and experiencing it yourself. Of course, as I said I love this type of movie because to me this is something that you can believe actually happens.

So if you haven’t seen The Conjuring and are looking for a truly scary movie that will also make you think twice about dismissing the paranormal this is a must see. It also has the bones to make it worth watching more than once. I myself have watched it numerous times and it keeps getting better. I have picked up on several inconspicuous things that I missed every time I watch.  I would definitely put it in the top 10 of my favorite horror flicks and if the paranormal is your cup of tea then I think you will to.

Oh, by the way, don’t miss the sequel “Annabelle”. It is just as good as the first.