Tenacious D in the Pick of Destiny 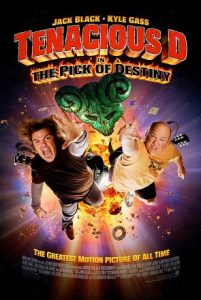 I just got through watching Tenacious D in the Pick of Destiny for the first time. I am not sure how I have dodged this movie for so long but I am here to tell you, really, very funny, typical Jack Black and something that I will be watching again and sharing with anyone that has not seen it before. It may even become a cult movie for me. 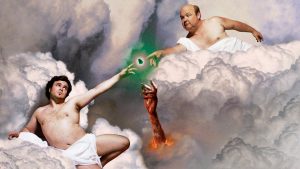 Tenacious D in the Pick of Destiny (TDitPoD – from now on) had me from scene one. Young JB’s father is played by Meatloaf. I had no idea the Loaf showed up in this flick. He is Jack Black’s overly religious father. JB comes in and sings a song to the family at the dinner table, Meatloaf is not happy and then proceeds to tear all the rock posters off his wall, to a song of his own. Freakin Meatloaf singing within the first few minutes of a movie – I am down. This is a true cameo. He is in and out, but wow – loved it! 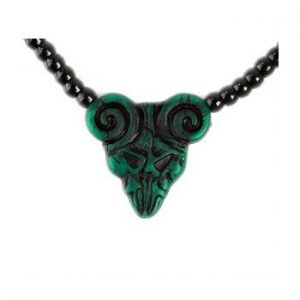 Another two cameos that I dug in TDitPoD: Ben Stiller and Tim Robbins. Ben Stiller, who also produced the movie, was the manager of a guitar center. Professional, stellar cameo by the producer. Just a brief glimpse and a plot device that moved everything forward. I knew from watching the scene, seeing only the back of his head that the manager of the store was going to be someone special, but I didn’t expect it to be Ben Still his own self.

Tim Freakin Robbins! Anytime he pops up in a movie, he makes me happy. He does not have to make movies like this. In fact, he could probably not work again and live a nice happy life. But he steps into these goofy movies and seems like he is having a blast. Tim Robbin’s character also drives the plot forward, telling Tenac how to get into the Rock and Roll History Museum to steal the Pick of Destiny. Him trying the “run” away from the police… great piece of physical comedy – not going to spioil it.

Dave Grohl is satan. I am sure that there are some pieces of society that thin that Dave Grohl might actually be satan but let me tell you he does rock as the Prince of Darkness.

Not an Academy Award winner but nonetheless, Tenacious D and the Pick of Destiny is well worth the watch or the re-watch if you have not seen it lately. And if you have a young-ish person in your life, in particular, someone that likes music and/or Jack Black, share this movie with them.