How to Talk Your Wife into The Walking Dead

How to Talk Your Wife into The Walking Dead

I love The Walking Dead. It is one of the few shows that I actually watch when it comes on. I would be glad to watch almost anything else when it happens to roll on to a streaming service. TWD has to be watched as soon as it comes out, that night no exceptions. I will say that this is something new, though. I was watching TWD after the fact, the next day, a few days later and then binge-watching as soon as it dropped on Netflix. Most of this was due to the fact that my wife was not into the show. I hated to either go watch it in the other room or worse make her go somewhere else when it was on.

This all changed when she became a fan. A fan that does not miss The Dead. A fan that Binge watched six seasons of The Walking Dead to get caught up.

Here is how I helped with that transitions – maybe it will help some of you out there that would love to share this bit of pop culture with the one you love., 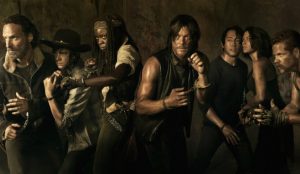 Persistence – Never Give Up – I have been talking about this show with my wife on and off since I started watching it. I will bring up something that happened, mention that I saw something on TV or online and of course, the fact that I kept bringing it up from time to time got her interested.

Not Just About the Dead/Undead – Now, Laura is not a big horror movie person. In fact, her idea of a horror movie is anything thsat might make her jump – this could include Gremlins… So getting her to get into a horror series was no easy feat. I kept pressing home the fact that the show is not really about zombies. It is about relationships and people and the zombies are merely an ongoing problem that they have to contend with.

Did I Mention Persistence? – Really it all comes down to keeping at it. Even those folks that think they will hate the show will find something they will like. Laura hated the opening to Season 7. Watching two folks die like that at the hands of Negan and Lucille was rough and she has said that she will never watch that episode again but it did not keep her from watching.

In the end, it was all about getting her involved in something I was geeking out about. It was about setting the stage for something that I knew she would like in such a way as to make her interested.

She looked at me during the Super Bowl and said: “you know that Walking Dead comes back next week, right?” I love her even mor enow than I did.