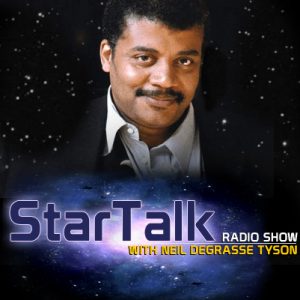 I have a secret science crush. I have had this crush for a while but it got worse when I started listening to the StarTalk Radio podcast with Neil deGrasse Tyson (NdT). I don’t know how I am so late to the party picking this podcast up but now that I have found it, I get to stream NdT into my earhole at least once a week. Sometimes I go back and listen to older episodes just to get a fix. In a StarTalk Radio podcast, you get humor, science, life and logical discussion in easy to digest chunks… and NdT.

Just in case you have been under a rock, let me tell you a little about NdT. Neil deGrasse Tyson is this generation’s Carl Sagan. He is the pre-eminent astrophysicist in America today and, more importantly, he is one of the biggest promoters of science to our very unscientific pop-culture. There was a time when science and scientists were sexy. When astronauts were America’s heroes.  NdT brought Sagan’s Cosmos back to the masses, for a new generation. He appears on TV shows and in movies and in documentaries. He keeps himself in front of the public, all the while throwing some science at the people. His day job is Director of the Hayden Planetarium in New York City – this guy is a real scientist but he is different than the stereotype. He shatters that stereotype. But, when you hear him dig into a subject with his guests… he knows his stuff.

Back to the topic at hand. The StarTalk Radio podcast has many different styles and formats. A typical episode will have NdT and a guest or two or three. These guests will run the gambit from scientists to authors to comedians. He chooses people that he is interested in. He chooses people that make him think, that are thought-provoking and sometimes you can see that he is geeking out over talking to them just as much as we are geeking out listening to them. You will run across Cosmic Queries, in which our intrepid host takes questions from the interwebs with the help of a co-host. Did I mention that a lot of the time NdT has comedians as his co-hosts? Eugene Mirman and Chuck Nice are the two that appear on the show most but anyone might turn up. Dr. Tyson has done a very good job of surrounding himself with interesting, funny, witty, smart people. All of these factors makes this a podcast that I wait for each and every week. 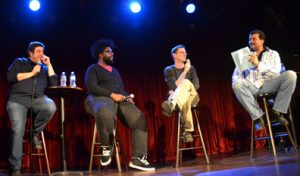 Then there is Star Talk Live. Live shows, that you can attend, around the country. Yes, you can go catch a StarTalk Radio episode live! Again, the panel at these shows is diverse and interesting, thought-provoking and most of all fun. These live shows end up as podcasts but certainly if you are so inclined and live in the proximity they are going to having one, GO SEE IT and let us all know how awesome it is. These live shows usually have a bigger cast of characters but they are just as entertaining and full of NdT as a regular StarTalk Radio podcast.

Bill Nye is a fixture of the StarTalk Radio Show. Again, if you have lived under a rock most of your life, you may have missed Bill Nye. And to that, I say – SHAME. Bill Nye was a fixture of my childhood with his show Bille Nye the Science Guy. This show, much like StarTalk, tries to bring science to the masses. BNtSG broke down science for children and young adults making it fun and entertaining. Bill Nye has had a resurgence as of late both in his role on StarTalk Radio, on popular shows like The Big Bang Theory and just popping up in pop-culture all over the place. Google Bill Nye and Ken Ham on YouTube if you want to see a great scientific debate.

Anyway, add the StarTalk Radio podcast to your podcast playlist. Great show, very informative and just delightful. This is the way that I get my Neil deGrasse Tyson fix each week. Check it out!