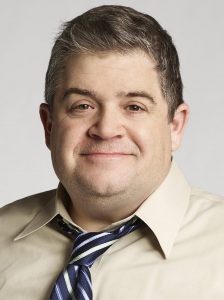 Patton Oswalt (born January 27, 1969) is an American actor, writer, and stand-up comedian. In television, he is known for his role as Spence Olchin in the sitcom The King of Queens (1998–2007) and guest-starring as the Koenigs on Agents of S.H.I.E.L.D. (2014–2020). After making his acting debut in the Seinfeld episode “The Couch,” he has since appeared in a variety of television shows, including Kim Possible, Parks and Recreation, Community, Two and a Half Men, Drunk History, Reno 911!, Mystery Science Theater 3000, Archer, Veep, A.P. Bio and Brooklyn Nine-Nine. He currently narrates the sitcom The Goldbergs (2013–present) as adult Adam F. Goldberg.

In his work as a stand-up comedian, he has appeared in six stand-up specials and won a Primetime Emmy Award for Outstanding Writing for a Variety Special and a Grammy Award for Best Comedy Album for his Netflix special Patton Oswalt: Talking for Clapping (2016).

Here is Patton Oswalt’s Top Five from This Geeks World:

#5 Big Fan – Paul Aufiero, a 35-year-old parking-garage attendant from Staten Island, is the self-described “world’s biggest New York Giants fan”. One night, Paul and his best friend Sal spot Giants star linebacker Quantrell Bishop at a gas station and decide to follow him. At a strip club Paul cautiously decides to approach him but the chance encounter brings Paul’s world crashing down around him.

#4 Nature Calls – Polar-opposite brothers Randy and Kirk never saw eye-to-eye, but their rivalry is taken to a new level when Randy hijacks Kirk’s son’s sleepover, taking the boys on a Scout Trip to remember.

#3 Sorry to Bother You – In an alternate present-day version of Oakland, black telemarketer Cassius Green discovers a magical key to professional success – which propels him into a macabre universe.

#2 Ratatouille – A rat named Remy dreams of becoming a great French chef despite his family’s wishes and the obvious problem of being a rat in a decidedly rodent-phobic profession. When fate places Remy in the sewers of Paris, he finds himself ideally situated beneath a restaurant made famous by his culinary hero, Auguste Gusteau. Despite the apparent dangers of being an unlikely – and certainly unwanted – visitor in the kitchen of a fine French restaurant, Remy’s passion for cooking soon sets into motion a hilarious and exciting rat race that turns the culinary world of Paris upside down.

#1 The Comedians of Comedy – The Comedians of Comedy is an occasional stand-up comedy tour featuring Patton Oswalt, Zach Galifianakis, Brian Posehn and Maria Bamford that was documented in a 2005 film and 2005 Comedy Central television series of the same name, both directed by Michael Blieden. This is one of the best tour-based comedy specials ever made!