I’ll admit, it can take a brave soul to venture beyond the bounds of the culinary norm.  But eating off course and venturing into foreign territory can bring particular rewards, one of them is the oft taboo offal treat!

There are two distinct sensory memories from about 6 years of age that when I think on them, it is a miracle that I ever became the adventurous eater that I am today- or maybe they informed it, who knows. 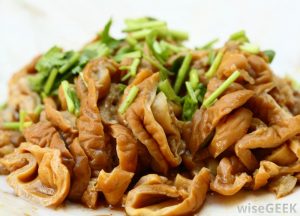 The first memory involved my father and great grandfather who was absolutely gaga for chitlins (braised cow intestines for the un-indoctrinated), the two would load up and go get a mess of chitlins one Wednesday out of each month.  The part of rural Mississippi where I grew up was home to Ms. Edna who owned a little eatery much like the Whistle Stop Café if you ever happened to see ‘Fried Green Tomatoes.’  So once a month Ms. Edna would fire up her big chitlin pot; a cauldron of sorts and get those intestines to boiling for hours otherwise they’d resemble in texture that really bad calamari which always reminds me of tires on toy cars.  I’ll offer for those having never had the pleasure of experiencing chitlins first hand- when cooking, they STINK.  They smell exactly like what they transport from can-to-can’t (pronounce caint when in rural MS).  Edna’s Truck Stop perched at the entrance to our little village and the denizens always knew what day it was as soon as Ms. Edna got her pot to going and wafts of shite drifted down Highway 19. 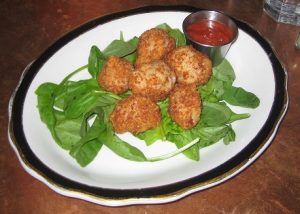 The other memory that comes back to me when I think on the subject of offal is directly linked to my particularly mischievous Great Uncle Bill.  It was the end of summer, but before fall really set in, and there was a family reunion afoot.  That year Uncle Bill decided to slaughter a hog, a big boar hog named Jesse I believe.  [For those far removed from their food sources, I want to point out ole Jesse only had one bad day in his whole porcine life.]  After scalding, scraping, and butchering, Uncle Bill and some older cousins begin to cook various bits of ole Jesse and offer to the gathered mass of folks.  My family, well we were a bit differ’nt, as my people might say, because we had recently moved back to Mississippi after some time in Alaska where I spent my very early childhood.  It is safe to say I didn’t sound much like my cousins and because of this my Uncle Bill, whom I adored, liked to pick at me a bit.  Uncle Bill seeing an opportunity for amusement offered me a prime bit of ole Jesse. “Cotton-top (my nickname of childhood) come here and try some of these Rocky Mountain Oysters.”  Not having any idea of what those might be, but smelling the glories of grilled pig, I swooped in for the score.  Greedily I took a bite and chewed.  Everyone burst with laughter and Uncle Bill, who can barely contain himself, asks “boy, how do you like them oysters?”  Based on the amount of laughter emanating from my uncle and other male relatives gathered round, I knew I had been had.  Only much later did I learn the nature of Rocky Mountain Oysters and from whence they came. 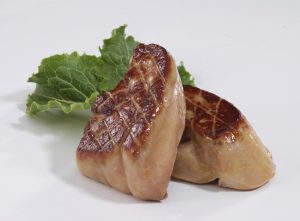 Having spent a good part of the past decade traveling around the world I’ve eaten the cousins of Rocky Mountain Oysters called criadillas in Spain, and chitlins too have a relative down in Colombia that go by the name chunchullos; both well and good, and assuming there is cold beer involved, I wouldn’t pass up a plate…..but the offal I’m most in love with?  Foie gras and sweetbreads.  Well, while we are at it, throw in a nice country pâté.  There is nothing, and I mean nothing finer than a seared slab of foie gras dressed in a reduction of red wine and with some sweet compotie deliciousness backing it up; or for that matter those most prized of glands- sweetbreads [which by the way, the name, makes no f’ing sense- they are neither sweet nor a bread of any kind whatsoever].  If you’ve never experienced sweetbreads, it’s time to manup and order some.  You won’t be disappointed, tender to the point of almost being creamy.  Have them grilled with a bit of salt, pepper, and a hit of citric acid.  Coño que rico!

So while the majority of, culinarily speaking, boring fast food chugging Americans regard offal as awful, you now have the opportunity to flex your pallet.  Not only can you get some delicious dishes out of hearts, lungs, livers, kidneys and other innard bits, but it is also terribly responsible to eat those dishes.  Our obsession with a few select cuts from any given animal means we are wasting millions of tons of great meals; and I try never to waste a great meal. Get curious, get bold, and get yourself some offal.