I have received bad news that is affecting my ability to play a video game. No Mods for Fallout 4 on PS4 – WTF. I mean really Sony, WTF! Early in the summer, XBOX One made the jump with the folks from Bethesda, they turned on Mods for a console. Fallout 4 players on XBOX could now do something that was not possible anytime before this. You could finally add mods to a console video game. You were no longer trapped by the game, the man was no longer keeping your down. You have the ability to take the game beyond the game. To do something different. Sure you still had a storyline, you still got to play through everything that you were going to play through but you could do it an entirely different way.  And for me, it meant that I could cheat. Cheat my fool head off. 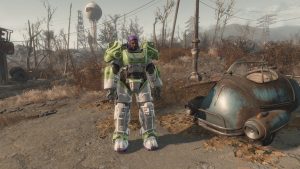 A Mod, in the case of this discussion, is a modification to a video game. People have been modding video games since the first person realized they could hack the hexadecimal codes to cheat on games and then took that to the next level, making Lara Croft naked while you played Tomb Raider. Mods can be used to make the game more challenging, much easier or simply make it look different. Bethesda, for the computer versions of its games, they have gone so far as to give the player access to the creative engine behind the game, freely asking players to use their imaginations and do their worst/best/most interesting. Bethesda does not care what you do to their games and this idea has made their games extraordinarily re-playable. And it has made the folks at Bethesda better at making new games. They are seeing what people might like to do. 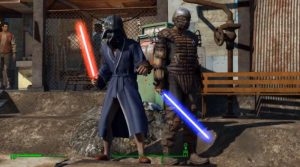 Why do you need to mod? Can’t you just play the game like it is? Well sure, I could do that but why? I admit, that I will usually play through a game the right way the first time but my second play-throughs on most games are either just to experience a different part of the game or to try get 100% completion. When I heard that we would be getting mods, I begin looking at mods and wondering what I could do with the game. I wanted to play through they way that I wanted to play through. I wanted ALL the perks in the game early on. I wanted mods that made the game easy and let me explore everywhere. Needless to say, I was very happy.

So, Bethesda and Sony tell us, the PS4 Fallout 4 players, that we will be getting mods late spring/early summer. We wait, we check the forums. We wait.We google the crap out of the phrase “fallout 4 ps4 mods.” Stalling. Delaying. Wait. Wait. Wait. Earlier this week, one of my Google Alerts picked up the announcement.

“No Mods, PS4 players of Fallout 4. Go screw yourselves.”

That is a paraphrase but you get the point. Don’t have the same want to finish the game now. Nuka-Wold is a little more tarnished. I don’t even like killing raiders as much as I used to.