Do you remember, back in the idea, the idea of Must See TV? This was a slogan created by NBC to convince viewers that the hour prior to Seinfeld in the 90s was comedy gold and that you had to watch it. Great advertising slogan and with the lineup of shows that they had at the time, it probably was Must See TV. Looking back, this idea seems so archaic. We actually had to watch TV when it was on. We had to watch TV when the broadcasting companies said we had to watch.

Just for reference, for those of you that were not alive then or those of you that have forgotten. NBC ruled the radio airwaves on Thursday night in the 90s for a long time. They had flagship shows. Seinfeld, Cheers, Friends, ER. Those were the biggies. Others came after. Some were good, some were… not as good. The timeslots around Seindfeld, in particular, were supposed to be the ground where a new show got the Midas Touch. That did not always happen but you know there were shows that slid into those slots that would have never been made otherwise. But, I am off topic. 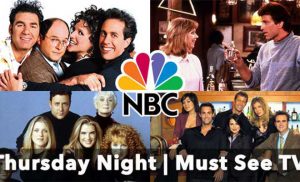 I don’t think that Must See TV can happen anymore. Now, there are exceptions for certain shows. Certainly, The Walking Dead comes to mind but as far as a channel convincing the better part of America to stop what they are doing and watch TV for all of primetime? I just don’t think that is the case. People still watch TV. People still watch live TV. There are events that happen like the Super Bowl or… the Super Bowl. That you have to watch when it comes on but anything else can probably be DVRed and watched a later date or you can wait until it hits Netflix and binge watch the whole thing or catch it on Hulu or better yet watch original programming on a “network” that doesn’t care when you watch it.

Netflix, Prime, Seeso, YouTube and all the rest of the streaming services are putting out programming that is just as good and in most cases better than the stuff on traditional TV. Just to name a few: Stranger Things, The Grand Tour and Jessica Jones have all been watched and/or binge watched from the streaming services that they were created by. Stranger Things, in particular, was so good that we watched the whole thing in the span of a weekend – really more like a day and a half. The Grand Tour was released y Amazon weekly but the fact that it dropped didn’t necessarily mean that we were going to watch it right then.

I really enjoy being able to watch something when it comes out. To watch the whole thing or pieces of it. If this means that I am a little behind in my pop-culture viewing that is ok. More and more people are caring little for what comes out on the large networks. These streaming services are producing high quality, better-told stories. They are focusing on the stories that the want to tell instead of just trying to make a buck and focus on what their advertiser might dig.

Anyway, my wife and I are working through Cheers right now and I just got done with the book Seinfeldia so this idea of Must See TV was stuck in my head. Go watch somerhing on your favorite screen when you want to and where you want to. Don’t be tied down to primetime.