We have now seen our last film with Hugh Jackman playing Wolverine. Logan is the Story of Wolverine – in a time, in the future – he is dying and he is trying to help Professor X. Past the plot you have an outstanding performance by Hugh Jackman and newcomer Dafne Keen as X-23. You have the humor that the non-Marvel-Studios movie have lacked from time to time and we see that we can make an R-Rated comic movie that is not off the wall like Deadpool. 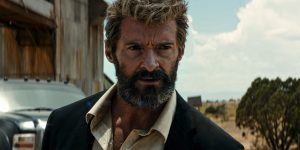 So Wolverine got old. Who would have thought? Prof X got older. They are both dying. Logan is attempting to raise the money to get Charles away from society and people so that he can die in piece. Almost all of the mutants in the world are dead. Logan thinks he and Charles are the last two of their kind. In the process of trying to protect Charles and earn some green, he encounters a new mutant that is also on the run. This mutant turns out to be created from Logan’s DNA, making her his daughter, more or less. He attempts to get her to Eden – a mutant refuge. X-23 makes it past Eden to the border with Canada, not everyone else does. 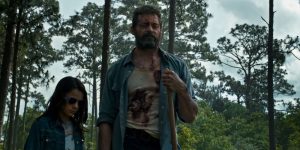 Hugh Jackman has been playing the character of Wolverine for over 17 years. He has made the role his own and even made it through some really bad scripts (X3, for instance). Through all of that, he has stayed at the top of his game and made one of the most iconic characters in the Marvel Universe his own. This final bow to the comic book gods is a perfect exit for he and his version of Wolverine. Hugh Jackman’s portrayal of this role has been the one shining spot in this series of movies. He has been the one thing that has always made the X-Men movies worth seeing. When all else failed we could count on Hugh Jackman to bring an intensity to the screen that matched The Wolverine that we know and love from the comics.

I don’t know where they found Dafne Keen but she was incredible. Almost silent for the entire movie, she played the role of X-23 with devotion and power. She moved well, she shared the screen with people like Hugh Jackman and Patrick Stewart and was not overshadowed at all. I would not have thought that they could have replicated the look and feel of the comic character that easily but they really did. They let her be a little girl and a bad ass all at the same time.

Deadpool took the scene as the first modern comic book movie with an R-Rating. Logan took the challenge of the R and met it with language and violence. We got the Wolverine being Wolverine. Cursing, slashing, cursing some more and occasionally driving those claws through someone’s skull. Too fantastic for words. Before in the X-Men movies, we have had a lot of quick slashing and people falling on the ground. In this one, the violence is much more a part of the story. The story of someone that is not proud of what he has done, at least not all of it. But he is very good at what he does – and what he does isn’t very nice.