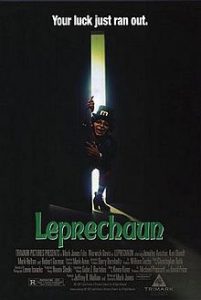 Leprechaun (1993) is a horror comedy and the first in the series of Leprechaun movies. Leprechaun – some light St Patrick’s Day viewing – is one of those movies that you love because of its innate poor quality and thin plot. The fact that it is also one of Jennifer Aniston‘s first and worst movie roles makes this something you have to watch at least once and with it being leprechaun themed makes it a great movie to watch each and every St Patty’s Day.

I don’t remember when I first watched Leprechaun. I don’t think it was in the theater, I believe I probably rented this one to watch at the house soon after it came out, though. In fact, I don’t know if this actually made it to wide release in the theater or to the theater at all.

1993 was a few years before I really got into movies as deeply as I am now, but I knew the name Warwick Davis. Wicket the Ewok – Willow – Warwick Davis was in a lot of those movies that shaped my childhood and the way that I saw pop culture. Here he was in a new movie – and he was the bad guy. Something new from Mr. Davis and, he was going to play a Leprechaun. I was getting more and more into horror movies and this one really caught my eye.

So I decided to take in Leprechaun – Some Light St Patrick’s Day Viewing. Just to set the tone for the holiday.

Jennifer Aniston, the female lead, did what all female leads do in horror movies from this time. Run and eventually solve the problem of the monster, killer, whatever. She is at times both the dainty flower and then the rock that the rest of the crew has to lean upon. All of that being said, there is some truth to this being her worst movie role ever. You watch her in Leprechaun and you wonder why she continued acting but this her first credited role in a movie. Her only other movie credit was Mac and Me… I think that says it all. 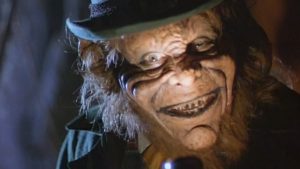 Warwick Davis, however, was incredible and made this movie for me. He is why I can continue to watch it year after year. Now, I am not saying that this is an award winning acting job or even a good acting job but Davis has all of those nuances that made horror movies fun in the 80s and 90s. He was a bit funny, a bit a menacing and a bit scary. More funny than scary but still a bit scary and just delightful with this odd take on a something that we never looked at as evil.

Hell, it was good enough to produce a string of sequels and a remake. So I say go for it. Settle in and give it a watch. I might even end up added this one to my movie collection. You might find yourself sympathizing with the Leprechaun. Pulling for him to find his gold. Hoping that he kills off a few of the more annoying characters. Yeah, they deserve to die.