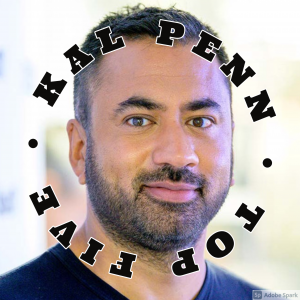 Kalpen Suresh Modi,known professionally as Kal Penn, is an American actor and former White House staff member in the Barack Obama administration. As an actor, he is known for his role portraying Lawrence Kutner on the television program House, as well as the character Kumar Patel in the Harold & Kumar film series. He is also recognized for his performance in the film The Namesake. Penn has taught at the University of Pennsylvania in the Cinema Studies Program as a visiting lecturer.

In April 2009, Penn joined the Obama administration as the Principal Associate Director in the White House Office of Public Engagement. This necessitated that his TV character, Lawrence Kutner, be written out of House. Penn briefly left his post in June 2010 to film the third installment of the Harold & Kumar series, A Very Harold & Kumar 3D Christmas, returning to his White House job upon the movie’s completion. In July 2011, he again left the White House to accept a role in the television series How I Met Your Mother.

From 2016 to 2019, he played Seth Wright in the political drama Designated Survivor, he also served as a consultant on the show. and served as host of the game show Superhuman. In 2019, Penn portrayed Garrett Modi in the NBC sitcom series Sunnyside.

Harold & Kumar Go to White Castle (2004) Nerdy accountant Harold and his irrepressible friend, Kumar, get stoned watching television and find themselves utterly bewitched by a commercial for White Castle. Convinced there must be one nearby, the two set out on a late-night odyssey that takes them deep into New Jersey. Somehow, the boys manage to run afoul of rednecks, cops and even a car-stealing Neil Patrick Harris before getting anywhere near their beloved sliders.

Harold & Kumar Escape from Guantanamo Bay (2008) Having satisfied their urge for White Castle, Harold and Kumar jump on a plane to catch up with Harold’s love interest, who’s headed for the Netherlands. But the pair must change their plans when Kumar is accused of being a terrorist. Rob Corddry also stars in this wild comedy sequel that follows the hapless stoners’ misadventures as they try to avoid being captured by the Department of Homeland Security.

National Lampoon’s Van Wilder (2002) Van Wilder has been attending college for far too many years and is scared to graduate, but Van’s father eventually realizes what is going on. When he stops paying his son’s tuition fees, Van must come up with the money if he wants to stay in college, so he and his friends come up with a great fund-raising idea – throwing parties. However, when the college magazine finds out and reporter, Gwen is sent to do a story on Van Wilder, things get a little complicated.

A Lot Like Love (2005) On a flight from Los Angeles to New York, Oliver and Emily make a connection, only to decide that they are poorly suited to be together. Over the next seven years, however, they are reunited time and time again, they go from being acquaintances to close friends to … lovers?

Malibu’s Most Wanted (2003) A senator arranges for his son, a rich white kid who fancies himself black, to be kidnapped by a couple of black actors pretending to be murderers to try and shock him out of his plans to become a rapper.