I Sell Comics is part of the SmodCo network of podcasts. Starring Mike and Ming, this podcasts has at its heart comic books but it covers any and every other topic that happens to cross the minds of the hosts. From interviews to ribbing the folks at Tell Em Steve Dave, from what happened at their last con to what happened on their TV show Comic Book Men – Mike and Ming can discuss any topic and entertain the masses while they do it. 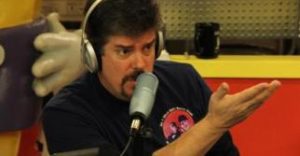 Mike Zapcic is one of the full-time employees at Jay and Silent Bob’s Secret Stash in Redbank, NJ. He was part of the crew there before they all became pop-culture names. He is now part of the SmodCo network on I Sell Comics and any other show that he is needed for. He is also part of the cast on AMC’s Comic Book Men. Mike is also a walking encyclopedia of comic book knowledge. He has a very even eye when it comes to comics, not seeming to favor either of the big two (DC or Marvel) – though he is a huge fan if Nightwing so he might swing a little more toward the DC line of books. That being said he is able to speak to any of the many titles that he reads or has read.

Ming Chen joined up with Kevin Smith when he was hired to build the original website for Kevin’s brand www.ViewAskew.com. Since that time, back in the 90s, Ming has stuck with View Askew and all of the rest of Kevin’s projects. He is part of the cast on Comic Book Men and he is on every podcast that he can find. Ming has a talent for podcasting and for drawing good conversations out of people that he is interviewing. Add to this a great enthusiasm for whatever topic he is talking about and a being talkative to a fault and you have the best personality possible for a podcast.

One of my favorite parts of I Sell Comics each week is their recap of what has just come out. I used to collect and I enjoyed looking through those new issues and reading every issue that they put in my pull box. Now that I am not an avid collector anymore, it is nice to hear about what is going on in the world of comics from two guys that spend their days working in and around comic books.

I Sell Comics is a big part of my podcast playlist which covers many of the SmodCo podcasts. These two guys always bring a smile to my face and the part I like best is the connection and friendship that they have together.