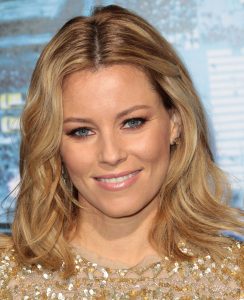 (born Elizabeth Irene Mitchell; February 10, 1974) is an American actress, director, writer, and producer. She is known for playing Effie Trinket in The Hunger Games film series (2012–2015) and Gail Abernathy-McKadden in the Pitch Perfect film series (2012–2017). Banks made her directorial film debut with Pitch Perfect 2 (2015), whose $69 million opening-weekend gross set a record for a first-time director. She also directed, wrote, produced, and starred in the action comedy film Charlie’s Angels (2019).

On television, Banks had a recurring role as Avery Jessup on the NBC sitcom 30 Rock, which earned her two Primetime Emmy Award nominations. She had recurring roles on the comedy series Scrubs and Modern Family, the latter of which earned her a third Primetime Emmy Award nomination. Banks starred in the Netflix miniseries Wet Hot American Summer: First Day of Camp (2015) and Wet Hot American Summer: Ten Years Later (2017). As of 2019, she hosts a revival of the 1980s game show Press Your Luck on ABC.

I have loved watching Elizabeth Bans on the Big Screen since Wet Hot American Summer. At some point, she blasted into the mainstream and she is literally everywhere. If it is good and it is coming out of Hollywood, there is a really good chance that Elizabeth Banks is involved. To that end, here is her Top Five from This Geeks World.

#5 The Lego Movie (2014) – An ordinary Lego mini-figure, mistakenly thought to be the extraordinary MasterBuilder, is recruited to join a quest to stop an evil Lego tyrant from gluing the universe together.

#3 The 40 Year Old Virgin (2005) – Andy Stitzer has a pleasant life with a nice apartment and a job stamping invoices at an electronics store. But at age 40, there’s one thing Andy hasn’t done, and it’s really bothering his sex-obsessed male co-workers: Andy is still a virgin. Determined to help Andy get laid, the guys make it their mission to de-virginize him. But it all seems hopeless until Andy meets small business owner Trish, a single mom.

#1 Brightburn (2019) – What if a child from another world crash-landed on Earth, but instead of becoming a hero to mankind, he proved to be something far more sinister?