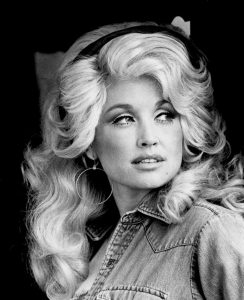 Dolly Rebecca Parton (born January 19, 1946) is an American singer, songwriter, multi-instrumentalist, actress, author, businesswoman, and humanitarian, known primarily for her work in country music. After achieving success as a songwriter for others, Parton made her album debut in 1967 with Hello, I’m Dolly, which led to success during the remainder of the 1960s (both as a solo artist and with a series of duet albums with Porter Wagoner), before her sales and chart peak came during the 1970s and continued into the 1980s. Parton’s albums in the 1990s did not sell as well, but she achieved commercial success again in the new millennium and has released albums on various independent labels since 2000, including her own label, Dolly Records. She has sold more than 100 million records worldwide.

Parton’s music includes the Recording Industry Association of America (RIAA)-certified gold, platinum, and multi-platinum awards. She has had 25 songs reach No. 1 on the Billboard country music charts, a record for a female artist (tied with Reba McEntire). She has 44 career Top 10 country albums, a record for any artist, and she has 110 career-charted singles over the past 40 years. She has garnered ten Grammy Awards and 50 nominations, including the Lifetime Achievement Award and a 2020 Grammy Award with for KING & COUNTRY for their collaboration on “God Only Knows”; 10 Country Music Association Awards, including Entertainer of the Year and is one of only seven female artists to win the Country Music Association’s Entertainer of the Year Award; five Academy of Country Music Awards, also including a nod for Entertainer of the Year; four People’s Choice Awards; and three American Music Awards.

In 1999, Parton was inducted into the Country Music Hall of Fame. She has composed over 3,000 songs, including “I Will Always Love You” (a two-time U.S. country chart-topper, as well as an international pop hit for Whitney Houston), “Jolene”, “Coat of Many Colors”, and “9 to 5”. She is also in a select group to have received at least one nomination from the Academy Awards, Grammy Awards, Tony Awards, and Emmy Awards. As an actress, she has starred in films such as 9 to 5 (1980) and The Best Little Whorehouse in Texas (1982), for which she earned Golden Globe nominations for Best Actress, as well as Rhinestone (1984), Steel Magnolias (1989), Straight Talk (1992) and Joyful Noise (2012). – Thanks, WIkipedia!

Here is Dolly Parton’s Top 5 movies from This Geeks World:

#5 Straight Talk – Small town girl moves to the big city and gets a gig on the radio hosting a call-in advice show. Parton plays the lead in this 1992 movie and it is just a fun movie that while not her best work, is still very fun to watch.

#4 Rhinestone – Dolly Parton and Sylvester Stallone star in a very strange version of Pygmallion. Parton bets everything she has to prove she can turn a New York cabbie into a Country Western Singer. Yes, Stallone sings.

#3 The Best Little Whorehouse in Texas – This is actually my favorite. This is the movie where I will Always Love You and Hardcandy Christmas both got their theatrical debuts. Dolly Parton, Burt Reynolds, Dom DeLuise, Charles Durning, and Jim Nabors star in this very funny musical. And yes, Burt Reynolds sings.

#2 Steel Magnolias – Dolly Parton’s version of Truvy Jones is spectacular. Such heart in such a tear-jerking movie. Truvy helps push the action and the plot along in both the play and the movie and Dolly Parton knocks the role out of the park.

#1 Nine to Five – This 1980 classic comedy gives us Dolly Parton’s first starring role in a movie. She, Jane Fonda, and Lilly Tomlin are amazing together. They are three co-workers that end up kidnapping their boss and running the company without him. And let’s no forget Dabney Coleman as Frank Hart – their boss. This is one of my favorite all time comedies.