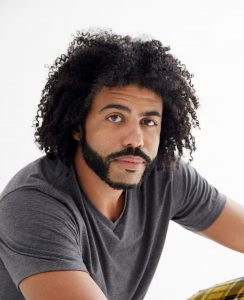 Daveed Daniele Diggs (born January 24, 1982) is an American actor, rapper, singer, songwriter, screenwriter, and film producer. He is the vocalist of the experimental hip hop group Clipping, and in 2015, he originated the roles of Marquis de Lafayette and Thomas Jefferson in the musical Hamilton, for which he won both a Grammy Award and Tony Award. Since leaving Hamilton, he played a recurring role in the television series Black-ish (2016–2018) and co-starred in the films Wonder (2017) and Velvet Buzzsaw (2019). Diggs also wrote, produced, and starred in the 2018 film Blindspotting, which earned him a nomination for the Independent Spirit Award for Best Male Lead. As of 2020, he stars in the television adaptation of Snowpiercer.

Here is Daveed Diggs Top Five from This Geeks World:

#5 Soul – Joe Gardner is a middle school teacher with a love for jazz music. After a successful gig at the Half Note Club, he suddenly gets into an accident that separates his soul from his body and is transported to the You Seminar, a center in which souls develop and gain passions before being transported to a newborn child. Joe must enlist help from the other souls-in-training, like 22, a soul who has spent eons in the You Seminar, in order to get back to Earth.

#4 Wonder – The story of August Pullman – a boy with facial differences – who enters fifth grade, attending a mainstream elementary school for the first time.

#3 Velvet Buzzsaw – Big money artists and mega-collectors pay a high price when art collides with commerce. After a series of paintings by an unknown artist are discovered, a supernatural force enacts revenge on those who have allowed their greed to get in the way of art.

#2 Blindspotting – Collin must make it through his final three days of probation for a chance at a new beginning. He and his troublemaking childhood best friend, Miles, work as movers, and when Collin witnesses a police shooting, the two men’s friendship is tested as they grapple with identity and their changed realities in the rapidly-gentrifying neighborhood they grew up in.

#1 Hamilton – An unforgettable cinematic stage performance, the filmed version of the original Broadway production of “Hamilton” combines the best elements of live theater, film and streaming to bring the cultural phenomenon to homes around the world for a thrilling, once-in-a-lifetime experience.