To Kill a Mocking-Jay

Oh, to Kill a Mocking-Jay. A few minutes of DragonCon exposure and my mind is unfurling in ways it hasn’t since my first warehouse rave in the year 2000; a psychotropic may or may not have had something to do with the trippiness of that former experience.  Likewise, at an event like DragonCon there are certain trippie sights you just can’t un-see no matter how many times you reassure yourself it isn’t real- but that is also the glory of such events I suppose, where Furbies, Potterites, and Sith Lords can all co-exist reveling in their shared existential exit from day to day normalcy.

For a great many, I can only imagine that such events are akin to gulping in that first breath of oxygen after metaphorically holding yourself underwater until the near point of passing out.  Walking through the lobby of one of the host hotels where I more or less happen to be living for the next few months got me thinking about high school in an odd way, an exercise I rarely undertake because even 20 years later certain remembrances can leave me shuttering.

Sometimes adulting in modern society isn’t all that different than trying to survive the gauntlet of acne-pocked tortures visited upon kids in hallways the world over.  This isn’t at all to give the impression that I do not enjoy the life I’ve created, I do and am living proof that it does,  in fact, get a lot better, but I know the feelings associated with seeking acceptance and navigating the complexity of identity. 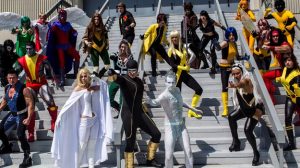 DragonCon and other events like it, create a safe zone for being weird, for thumbing your nose at convention.  I get it, not my shtick, but I get it and even applaud it from the safe distance of being a casual voyeur.  After crossing DragonCon’s own gauntlet to get to my dwelling I was also reminded of a conversation I was having at a bar a few days ago with a young man of extreme emotional intelligence who was busy defining his own reality.  If I were to guess, he was 30ish and had made the decision not to go to college in favor of curating experiences through work and travel abroad.  It would have been very easy to jump to the conclusion that he was merely attempting to be an ironic hipster after we got onto the topic of the perfect cup of coffee.  The intricacies he described made my morning ritual, by comparison, seem inept and a clumsy affectation of something holy.  Deep devotion brought him joy.  His obsessive compulsion in some ways is a bit like the desire, if not need, to participate in an event like DragonCon.

Our collective, based upon our social contracts with government, religion, and class can feel staggeringly contrived.  Rules and social imperatives compel us toward a heteronormative interpretation of the world and our place in it.  Which just doesn’t work for some people; it might be argued a great many people, possibly a majority.  Alt-reality and chasing something to its purest or most authentic form can be an attractive strategy for dealing (or not dealing) with adulting in our world.

Aren’t art and expressions of our imagination an attempt to touch something illusive and maybe even miraculous?  Can’t you find the divine in the simplicity of motion or the purity of a product?  Sure the answer can be yes to both questions, but I also think that more importantly each of us wishes to connect and sometimes those connections, whether through role play or devotion to a craft, can only happen in the fringes. Fringes accessed by removing yourself, if only on occasion, from the collective.  Live long and prosper- but seriously, don’t be a demonic Care Bear.  That’s just f’ed up.