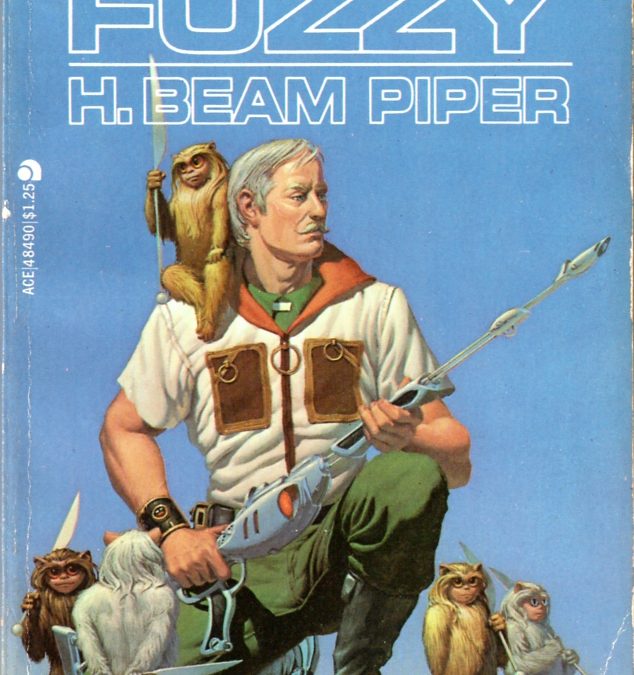 Yes, I’m a geek hence the reason I write for thisgeeksworld.com.  Or at least I was before kids when I still had time for geeky endeavors. Video games have taken a back seat to Elmo and the rest of the Sesame Street gang, Epic Rap Battles of History and learning every verse gave way to the Wiggles and trying not to remember anything that they sing, and reading…. Well, I still read as long as the kids are asleep or I have one hand available while giving the baby girl a bottle in the middle of the night.

Instead of focusing on the latest book series out or waiting very patiently (Yeah right!) on the next book in a series, I have gone back to my geek roots reading old pulp and sci-fi stories from the 30’s 40’s and 50’s. Kindle allows me, often on the cheap or even better free (overdrive app is a godsend for the cheap geek), to find these old stories lost to the annals of time except to the pulp lovers of that genre. 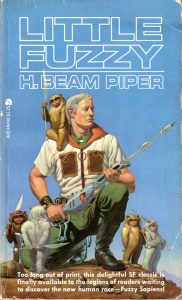 Right now, I’m revisiting an old friend I made by accident years ago when I picked up the Complete Fuzzy by H. Beam Piper at my local comic book store on the cheap. Not sure what I was in for, but for three dollars and getting a complete trilogy it was worthy of a chance.  I found a rich world with well-written characters and a thought provoking story with a lovable main charter in Little Fuzzy. No way could I have known how far down the Fuzzy hole I would go with those three dollars well spent.

With the book placed with so many others upon a shelf and awaiting such a time as when I couldn’t beat a boss level and swore off video games again, this was in my middle teenage years before the internet and walkthroughs, it was when a large storm came up that the power went down that I started my adventure into Piper’s world. Reading all three books in one sitting by oil lamp helped set the ambiance for a space adventure with morality questions that I didn’t expect and have rarely experienced outside of a physiological or religious text.  But mostly I really liked the cute fuzzy friends. 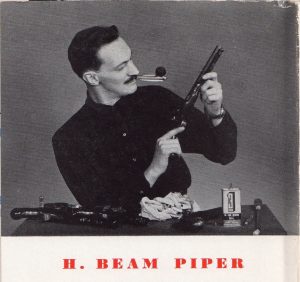 After this, I had to find more books, find more out about the author but most importantly find if there were more Fuzzies. Asking at the local library led me to some other short stories but few and far between because the rights to the author’s works had lapsed and most were long out of print. Talking to the librarian I found out the only reason they still had these was that they had been checked out within a year but were to be put into the annual book sale. Of course, I asked if I could go ahead and buy them but as all good stern librarians must she said no and even those were lost to me.

Years later, after the technological revolution finally reached the South, I found Project Gutenberg had, by donated time from fans and volunteers digitized many more of his works. Not only was I able to finally restart my adventure but this led me to many other writers of the same time with thoughts and questions like Piper’s but to other authors who had been influenced by his work. Now being able to read these books I tried to get my friends to sample them and be drawn into these amazing worlds and timelines along with me but this was the time when Peter Jackson was bringing The Lord of the Rings to the big screen and even many of my geeky friends were of the opinion, “why read about it when we can just watch it.”…..I didn’t have words then and I still don’t about that kind of thinking. 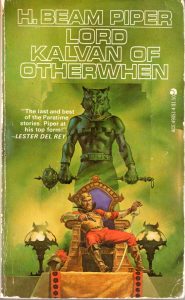 So, I set forth by myself uphill…both ways….in the snow, wait that’s a different story. Continuing to read over the years and later subjecting my wife to long tirades about no one to share these great books with, they aren’t her cup of tea as sometimes they deal with time travel and as seeing he doesn’t use a police call box, she won’t allow that in her stories of choice thank you very much, but she introduced me to many other authors along the way. (What I said about not waiting for books goes out the window for Ilona Andrews and Patricia Briggs) My blushing bride went so far as to gift me The Complete Paratime with all the short stories of Lord Kalvan and other Paratime police stories in one volume.

So now I subject…I mean introduce to you dear reader an author that was influenced and influenced many writers and lovers of sci-fi and hope that you get lost in the Paratime space but can find your way back. Just to be on the safe know, where your towel is and don’t panic. 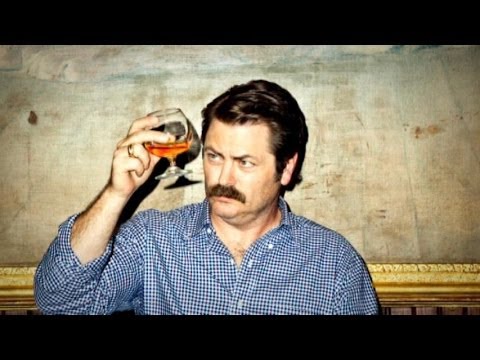 When I Grow Up I Want to Be Nick Offerman 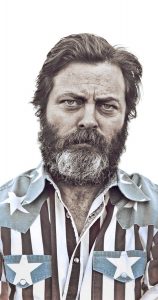 So, I am almost done listening to Nick Offerman’s book Gumption and I have decided that When I Grow Up I Want to Be Nick Offerman. Forget the obvious benefit that he is married to the funny, talented and gorgeous Megan Mullally, was one of the linchpin characters in the hit show Parks and Rec and that he is a fabulous stand-up comedian and author. Forget all of that. He is brilliant. He is thought provoking. And he has a grasp of culture, history, art and our world that few possess. It is to this last – his grasp of our world – that I want to draw particular attention.

Gumption, the book of his that I am reading now, outlines the lives and character of various people throughout history that he sees as having those traits that make them important to the fabric of our nation and the world. Gumption came out in May of 2015 but it needs to be on the reading list of every single American, in particular, those between the age of 18 and 35. Those folks young enough to be molded or at least bright enough to realize they need to be shaped.

Take a look at the tag line:

“Relighting the Torch of Freedom with America’s Gutsiest Troublemakers” 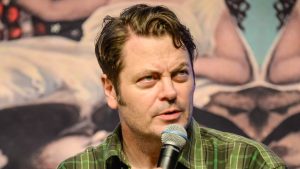 Literally, he names a figure from history, entertainment, etc to represent various character traits and he divides them into chapters such as Makers, Freemasons & Idealists. These individuals range from George Washinton to Wilie Nelson but they all have something in common. They were/are revolutionaries… visionaries… thinkers… doers. His choices and the traits that he chooses for each of them shows a real love of the topic and a lot of thought aimed at his subject matter. I don’t believe that I have ever read a book twice in a row but I believe that I am about to break that rule. I downloaded it using OverDrive so I will be listening to it as well – read in the dulcet tones that only Nick Offerman can offer.

“Far and away the best prize that life has to offer is the chance to work hard at work worth doing.” – Gumption by Nick Offerman 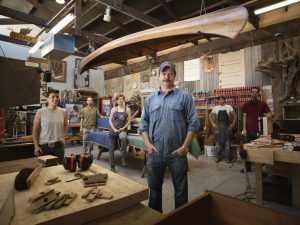 Offerman is a modern day renaissance man. Stand up comedian, trained actor, author, woodworker. Yup, woodworker. His personal website: www.offermanwoodshop.com, is an actual shop that creates works of art out of wood. It is not a joke, it is Nick Offerman’s business. It offers info on his other projects as well but it is the eCommerce end of an honest to god woodshop, you can buy things made of wood, that he and the artists he employees have made. WHAT!?! The first time you visit the site, you might have the same reaction that I did: “Am I at the right place?” I love the fact that he is more than just a comic or an actor or an author. The fact that he can “do” things and make things, makes him even more interesting than if he was just writing about those topics. If you get to choose one celebrity to get stranded on an island with – you pick Nick Offerman. 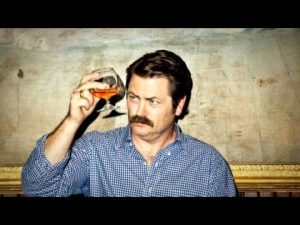 “Find out what makes you kinder, what opens you up and brings out the most loving, generous, and unafraid version of you—and go after those things as if nothing else matters. Because, actually, nothing else does.” – Gumption by Nick Offerman

At the end of the day, this book is life changing. This book makes you re-evaluate what you do, why you do and how you do. I think I might have to buy a couple of copies of this book for those young people in my life that are about to move from being children to being adults. Gumption goes on my annual read list (this is a very short list of books I read or listen to each year). And, of course, as I stated before, when I grow up I want to be Nick Offerman.

Nick Offerman for Mayor of Detroit and then President – just saying.