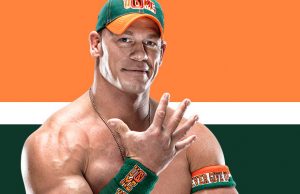 In my many years of watching wrestling, and it has been roughly 30 years as a fan going all the way back to the Rock’n Wrestling cartoon and writing a letter to Hogan after Earthquake broke his ribs and put Hogan out for a few months.  I did receive a postcard from Hogan (or some person in the then WWF mailroom who was in charge of responding to the tear soaked well wishes from kids like me) and I kept that post card for years.  This is my love for wrestling…but I have a bone to pick with the people who say “I hate John Cena” for the same reason that we loved Hogan.

Yes, John Cena tears through all challengers like Hogan did in the 80’s and early 90’s.  It’s hardly a surprise when Cena destroys an undefeated Rusev at Wrestlemania, or he wins an “I quit” match (mainly because “Never Give Up” is his motto) or, when he does lose, it’s not a clean loss and there is some sort of WCW screwjob finish that doesn’t make sense to the fans (see the Last Man Standing match where he duct taped Batista to a ring post).  We grow tired of his snarky remarks, smug face, and general sense of entitlement that drips off him as he buries guys that should be headlining ‘Mania with him. 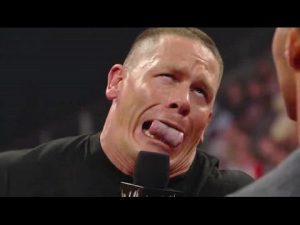 Along with that is his insistent pushing of merchandise. It seems like every week he has a new t-shirt, hat and sweat bands. He is a walking billboard that empties the wallets of hardworking men everywhere, especially men that hate his guts and boo him out of the building! It is humorous to see a grown man boo John Cena, only to be flanked by his wife/girlfriend and kids all decked out in the newest Cena gear. I will not lie, my wife and youngest daughter have Cena shirts and it pains me to know how much I paid for them. He appears to be just a walking billboard for himself.

You hear it all the time…John Cena should make a heel turn! I’d cheer for Cena if he was a heel! I’m so sick of John Cena and that played out “Hustle-Loyalty-Respect” gimmick! Cena is just a rip off of Hogan!…and many, many more reasons for grown men to hate John Cena. But, there’s a catch, WWE is NOT (caps lock for effect!) it will NOT turn Cena heel because he is their biggest cash cow on the roster and he does too much good in the community with the Make-a-Wish Foundation for him to be a heel. But…maybe he is a heel… 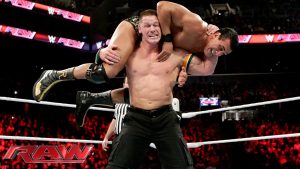 So, let’s put this all together.  W”I hate John Cena” because he wins big matches against big villains or against people who we think should be headlining. So we boo. We hate that we KNOW that he is going to win the big match at SummerSlam or Mania (or there will be a stupid finish where he does not lose cleanly…see John Stewart). So we boo. We hate that our families choose Cena merchandise over our favorite wrestlers (see Cesaro, Kevin Owens, Seth Rollins, Stardust). So we boo. And as we boo he smiles…he has the audacity to look square in the camera with a sly grin, as if to say “you’re doing exactly what I want you to do”.  Fans, I do believe that Cena is the biggest heel in the company simply because he refuses to be anything other than the new Hogan. The women and children scream and cheer, the men boo and jeer, yet we pay our hard earned money to watch Cena. Our families want that great victory and we are hoping for the grand loss. I jumped out of my chair when Kevin Owens beat Cena clean a few months back, then Cena abruptly sent him back down to the mid-card. And that is why I believe he is a heel. I pay to see him lose, just like people paid to see Dusty or Steamboat beat Flair. We pay to watch the heel lose, and we boo the heel out of the building. Just turn on Raw on Mondays and listen to the crowd.  Cena is the biggest heel of the company and he’s doing it with a smile and nod to our kids and wives. How I hate John Cena for that…but I will continue to watch until the day that smug look is wiped off his face.