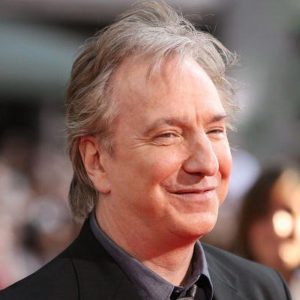 Alan Sidney Patrick Rickman (21 February 1946 – 14 January 2016) was an English actor and director. Known for his languid tone and delivery, Rickman’s signature sound was the result of a speech impediment when he could not move his lower jaw properly as a child. He trained at the Royal Academy of Dramatic Art in London and became a member of the Royal Shakespeare Company (RSC), performing in modern and classical theatre productions. He played the Vicomte de Valmont in the RSC stage production of Les Liaisons Dangereuses in 1985, and after the production transferred to the West End in 1986 and Broadway in 1987 he was nominated for a Tony Award.

Rickman’s first cinematic role was as the German terrorist leader Hans Gruber in Die Hard (1988). He also appeared as the Sheriff of Nottingham in Robin Hood: Prince of Thieves (1991), for which he received the BAFTA Award for Best Actor in a Supporting Role; Elliott Marston in Quigley Down Under (1990); Jamie in Truly, Madly, Deeply (1990); P.L. O’Hara in An Awfully Big Adventure (1995); Colonel Brandon in Sense and Sensibility (1995); Alexander Dane in Galaxy Quest (1999); Severus Snape in the Harry Potter series; Harry in Love Actually (2003); Marvin the Paranoid Android in The Hitchhiker’s Guide to the Galaxy (2005); and Judge Turpin in the film adaptation of Stephen Sondheim’s musical of Sweeney Todd: The Demon Barber of Fleet Street (2007).

Rickman made his television acting debut playing Tybalt in Romeo and Juliet (1978) as part of the BBC’s Shakespeare series. His breakthrough role was in the BBC television adaptation of The Barchester Chronicles (1982). He later starred in television films, playing the title character in Rasputin: Dark Servant of Destiny (1996), which won him a Golden Globe Award, an Emmy Award and a Screen Actors Guild Award, and Dr. Alfred Blalock in Something the Lord Made (2004). Rickman died of pancreatic cancer on 14 January 2016 at age 69. His final film roles were as Lieutenant General Frank Benson in the thriller Eye in the Sky (2015), and reprising his role as the voice of the caterpillar from Alice in Wonderland (2010) in Alice Through the Looking Glass (2016).

#5 Die Hard (1988) – NYPD cop John McClane’s plan to reconcile with his estranged wife is thrown for a serious loop when, minutes after he arrives at her office, the entire building is overtaken by a group of terrorists. With little help from the LAPD, wisecracking McClane sets out to single-handedly rescue the hostages and bring the bad guys down.

#4 Sweeney Todd: The Demon Barber of Fleet Street (2007) – The infamous story of Benjamin Barker, a.k.a Sweeney Todd, who sets up a barber shop down in London which is the basis for a sinister partnership with his fellow tenant, Mrs. Lovett. Based on the hit Broadway musical.

#2 Galaxy Quest (1999) – The stars of a 1980s sci-fi show—now eking out a living through re-runs and sci-fi conventions—are beamed aboard an alien spacecraft. Believing the cast’s heroic on-screen dramas are historical documents of real-life adventures, the band of aliens turn to the cast members for help in their quest to overcome the oppressive regime in their solar system.

#1 Harry Potter and the Deathly Hallows Part 2 (2011) – I had to choose one of the Harry Potter movies but to be honest he was a highlight in every single one. Harry, Ron and Hermione continue their quest to vanquish the evil Voldemort once and for all. Just as things begin to look hopeless for the young wizards, Harry discovers a trio of magical objects that endow him with powers to rival Voldemort’s formidable skills.

END_OF_DOCUMENT_TOKEN_TO_BE_REPLACED

This is a goofy comedy. It is not much more than...